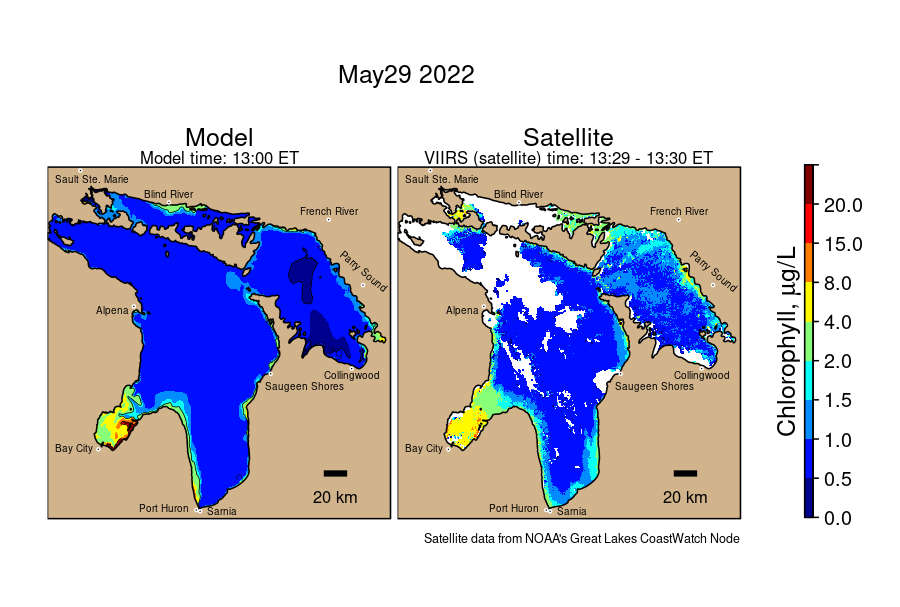 Figure 1: A comparison of model to independent satellite observations of Lake Huron chlorophyll concentrations from May 29, 2022. Transport of productive waters from Saginaw Bay near Bay City (highlighted in brighter colors) along the “thumb” down to Port Huron, Michigan is a common spatial pattern that emerged in the model and was confirmed by satellite imagery.

Declining offshore productivity in Lakes Michigan and Huron has been a multi-decadal trend causing scientists to investigate and evaluate the importance of nearshore primary productivity in supporting the lakes’ fisheries. However, the dynamic nature of the nearshore environment in the Great Lakes makes studying these areas inherently challenging. Strong and shifting currents, variable tributary nutrient inputs and flows, seiches, and upwellings/downwellings create a dynamic and patchy pattern of primary productivity “hotspots” in the nearshore that are difficult for field crews to locate and sample. These sampling challenges complicate the ability to collect environmental information that can support effective management strategies.

The Cooperative Science and Monitoring Initiative (CSMI) is a bi-national effort to coordinate research priorities and monitoring activities on one of the five Great Lakes each year. Research priorities guiding the CSMIs for Lake Michigan (2020-2021, COVID-19 disruption caused an extension into 2021) and Lake Huron (2022) included studying the importance of tributaries and nearshore areas to lake productivity and the need to focus sampling efforts on these productivity hotspots. To help address these objectives, project leader Mark Rowe, PhD (NOAA GLERL), Peter Alsip (University of Michigan, CIGLR), and Alex Kain (University of Michigan, CIGLR) developed an experimental biophysical modeling forecast system for Lakes Michigan and Huron.

“This model is part of a broader effort to explore our ability to use realtime biophysical models and forecasts to support field research,” said Rowe. “If successful, field research guided by realtime models could provide new insights into localized and transient phenomena of ecological significance that are challenging to locate and sample.”

Model-predicted chlorophyll-a and dissolved organic carbon (DOC) are generated daily and uploaded to a public website for field researchers to access. “Chlorophyll-a and DOC are used as indicators of the influence of rivers on primary productivity and as a tracer of river water as it disperses into the lake, respectively,” said Alsip. “The variables are discharged into the lake model through 124 rivers in the Michigan-Huron domain [40 Michigan tributaries and 84 Huron tributaries], providing a way to identify river plumes. Identifying river plumes could help researchers who might be interested in measuring the effects of a large runoff event on the nearshore biophysical environment.” Currently, the website focuses on Lake Huron, in support of its 2022 CSMI field year, and includes three products: 1) a daily nowcast-forecast; 2) a year-to-date animation; and 3) a comparison of nowcast chlorophyll and DOC to Visible Infrared Imaging Radiometer Suite (VIIRS) satellite images from NOAA CoastWatch. “The model shows spatial patterns, both recurrent and episodic, in simulated chlorophyll and DOC,” said Alsip. “Some of the patterns simulated by the model include the movement of productive waters from Saginaw Bay, Lake Huron along Michigan’s “thumb region” (Figure 1), plumes of DOC near several North Channel tributaries, and elevated chlorophyll along Lake Huron’s southeastern shoreline.” 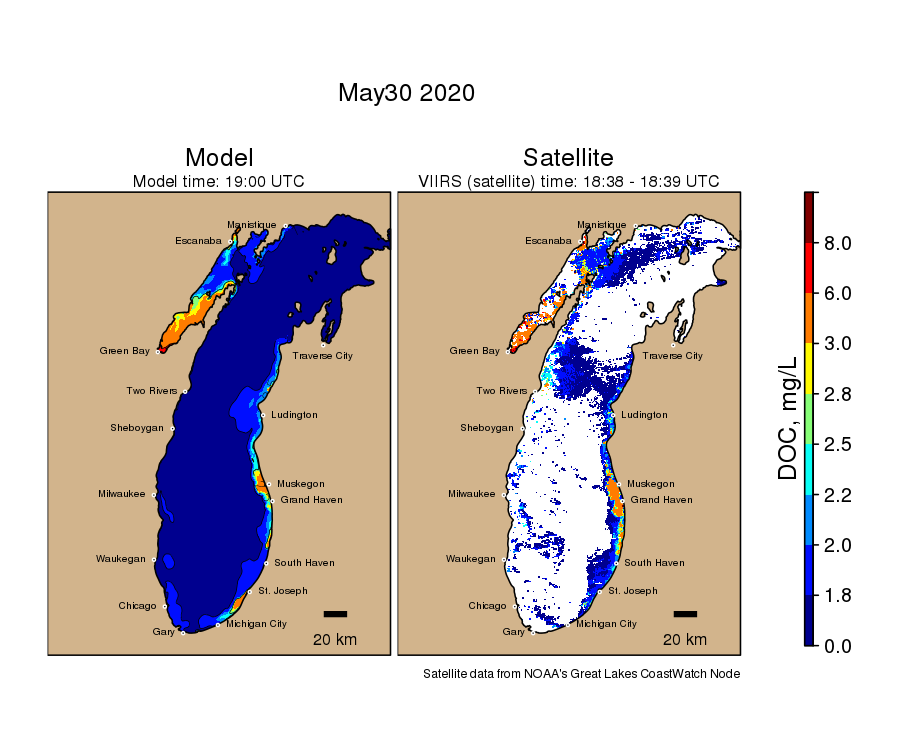 Figure 2: 2020 demonstration of the experimental biophysical model’s performance in simulating a large runoff event from the Muskegon and Grand River tributaries into Lake Michigan evidenced by DOC as compared to satellite imagery. Captured by Peter Alsip.

“The model-satellite comparisons allow us to evaluate the model’s performance throughout the field season,” said Alsip. “Satellite data is not without bias, but agreement between the model and satellite is a good indication of reality and can give more confidence in the model. It’s been really interesting to see spatial patterns emerge in the model and then be corroborated in the satellite imagery.”

Lake Michigan was the focus of the 2020-2021 CSMI (archived model output) and the model performed reasonably well in its ability to simulate spatial/temporal patterns in chlorophyll/DOC associated with upwellings/downwellings and tributary loading. In 2020, a large runoff event in the eastern tributaries of Lake Michigan, including the Muskegon and Grand Rivers, produced a large plume of DOC near Grand Haven, MI. The model simulated this runoff event skillfully and demonstrates the model’s utility at capturing short-lived events (Figure 2).

“Having a real-time forecast for these lakes has been great for executing field campaigns,” said Research Scientist Casey Godwin, PhD (University of Michigan, CIGLR). “There are not many places in the world where the application of coupled physical and ecological modeling has advanced to this stage. These products allow us to optimize precious ship time and direct autonomous vehicles toward the conditions we are most interested to study – this could be revolutionary for how we do this kind of work.”

“Use of biophysical nowcast-forecasts and recent satellite imagery to support field research may lead to new insights on transient features, such as river plumes and productivity hotspots, in dynamic nearshore areas,” said Rowe. The model will continue to run for the remainder of the 2022 Lake Huron field season. Progress by CIGLR and NOAA GLERL to develop ecological forecasts demonstrates how field and modeling research can complement one another, ultimately advancing shared goals and understanding of the Great Lakes ecosystem.