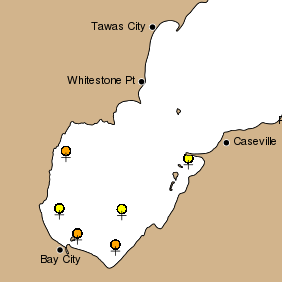 Field monitoring for HABs occurs bi-weekly in Saginaw Bay during the HAB season (July – October). The Date Stamp indicates when the most recent monitoring data was collected. Year:Month:Day

This data is produced by the Harmful Algal Bloom monitoring program, a joint effort by NOAA Great Lakes Environmental Research Lab (GLERL) and CIGLR with support from the Great Lakes Restoration Initiative. Monitoring data is provided “as is” and have not yet been subjected to quality control or quality assurance procedures. For data with QAQC, please refer to archive data. We work hard to post data from each week’s monitoring soon after collection, but there may be delays.