Harmful algal blooms (HABs) are formed by dense populations of cyanobacteria or blue-green algae that can produce toxins. HAB events are scientifically complex and economically damaging.  They affect our ability to safeguard ecosystem and human health, as was documented in August 2014, when nearly 500,000 people near Toledo, Ohio were without access to clean water due to algal toxin contamination. 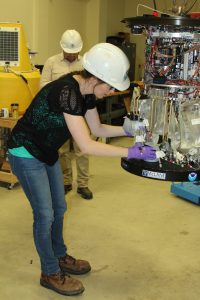 On September 13, the GLERL-CILER Harmful Algal Bloom team, led by NOAA researcher Dr. Tim Davis and CILER Research Specialist/ESP technician Alicia Ritzenthaler, deployed an Environmental Sample Processor (ESP) into Lake Erie.  An ESP is an autonomous robotic instrument that works as a ‘lab in a can’ in aquatic environments to collect water samples and analyze them for algal toxins.  An autonomous sampler allows for near real-time detection of HABs and their toxins, instead of relying on traditional water sample collection on the lake and toxin analysis in the laboratory, which typically takes 2 ½ days.  GLERL’s ESP, named the ESPniagara, will measure concentrations of particulate microcystin, the dominant algal toxin in the Great Lakes, every other day. It will also archive samples, allowing scientists to genetically detect Microcystis, which is the most abundant HAB in Lake Erie.  The ESPniagara is the first ESP used in any freshwater system and is part of a suite of 17 ESPs used globally. 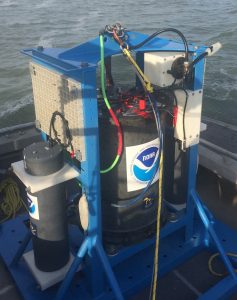 The ESPniagara has been collecting and analyzing water samples in Lake Erie during the month of September, allowing us to detect concentrations of toxins that may pose a health risk to people swimming, boating, or drinking Lake Erie water.  “It’s not feasible under the traditional method to take the time to run out to the lake every day for a sample. The ESPniagara will significantly increase our sampling capability,” said Tim Davis, GLERL’s lead HABs researcher.

This new, near real-time information will augment GLERL-CILER’s current weekly monitoring in Lake Erie, providing water managers with more precise bloom location, projected direction, intensity, and toxicity.  The ESPniagara will strengthen our ability to both detect and better predict future HAB events, with the goal to provide warning of potential human health impacts from microcystin.