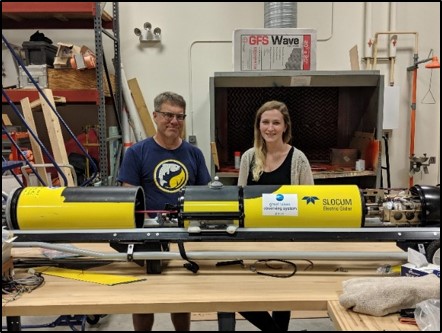 Proﬁling gliders are autonomous underwater vehicles (AUVs) used to collect spatial and temporal data throughout the entire water column. Unlike buoys, which are deployed in a fixed location, gliders are buoyancy driven, winged vehicles and can be programmed to travel to specific areas of interest collecting environmental data on conductivity, temperature, depth, chlorophyll, dissolved organic matter, and other parameters. CIGLR and NOAA GLERL have deployed gliders in Lakes Michigan, Huron, and Ontario since 2012, ultimately supporting a range of operations including detecting harmful algal blooms; ensuring safe navigation; supporting offshore energy operations, anglers, and fisheries managers; and enhancing public health and safety.

“The glider owned by CIGLR, named glos_236, has been in the water for a total of 521 days and has covered over 11,000 km of horizontal distance, collecting 85,016 observational profiles (salinity, temperature, chlorophyll, conductivity, among other things) along the way,” says Lauren Marshall. “That’s a lot of data to standardize and process.” 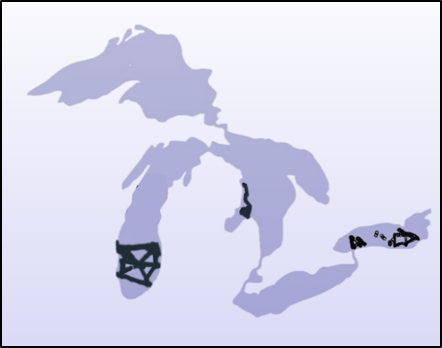 Lauren Marshall is a CIGLR Research Assistant and former 2019 Great Lakes Summer Fellow working with Lacey Mason (NOAA GLERL) and Russ Miller (CIGLR) to process and archive historical glider data and make them accessible to the public. “By making these data open access, they can be easily used by collaborators, scientists within our own organizations, and stakeholders across the Great Lakes basin,” says Lauren. “We are beginning to use the raw environmental data collected from our glider’s multiple sensors to validate hydrodynamic models and build visualizations to aid our understanding of the physical and chemical variations in the water column.”

“Now that the historical data have been archived, our focus has shifted to developing open source code and using freely available software for plotting the data,” says Lauren. “Presently, glider data plots and visual images are made using the Matlab software,  which produces cumbersome data files and requires an expensive license. By converting the processing code to an open source license like Python, any researcher will be able to edit and adapt the glider plots as needed.”

“Next up, our team is working to adapt our current glider data processing tools to be near real-time,” says Lauren. “This will be a significant achievement and allow access to glider data in a matter of hours, instead of weeks or months. We are really looking forward to that.”

Lauren Marshall graduated in May 2019 with a Master’s in Engineering from the University of Toledo. Lauren’s graduate work focused on the development of robotics for environmental service, with a concentration on aquatic applications. She first joined CIGLR as a 2019 Great Lakes Summer Fellow, processing glider data and making it accessible to the public. Currently, Lauren is a CIGLR Research Assistant working Russ Miller (CIGLR Mechanical Technician) and Lacey Mason (NOAA GLERL Data Manager/Spatial Analyst) to develop glider workflow programs and visualizations.