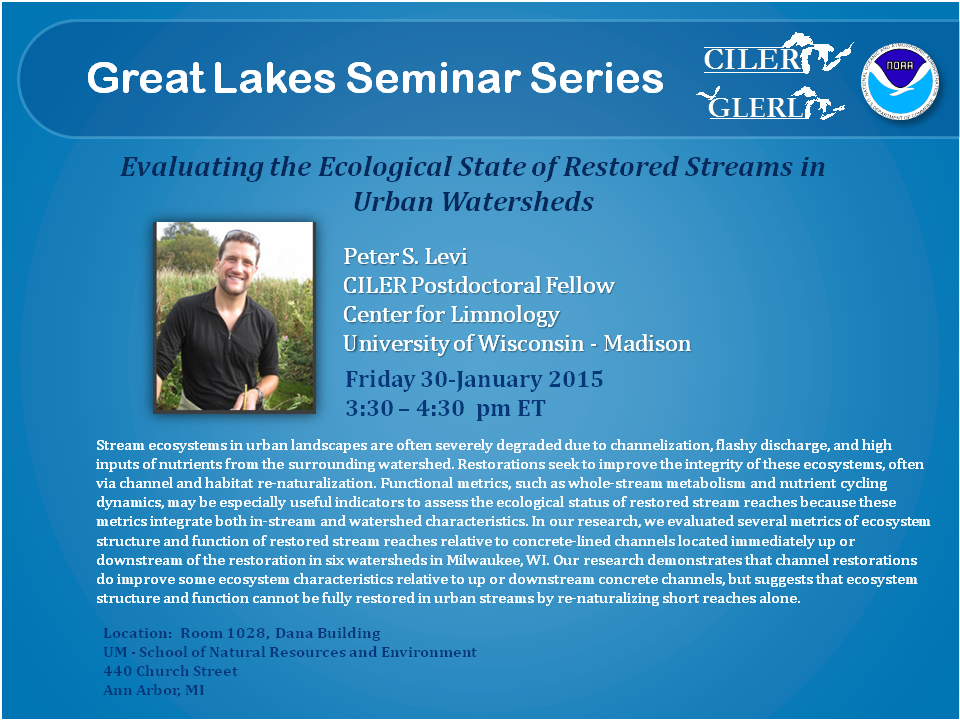 Abstract: Stream ecosystems in urban landscapes are often severely degraded due to channelization, flashy discharge, and high inputs of nutrients from the surrounding watershed. Restorations seek to improve the integrity of these ecosystems, often via channel and habitat re-naturalization. For example, floods in urban areas may be mitigated or prevented by replacing concrete-lined channels with more natural channel geomorphology (e.g., sediment, meander bends). However, streams are often not assessed or evaluated after restorations have been implemented, leaving questions on the effectiveness of these actions unanswered. Functional metrics, such as whole-stream metabolism and nutrient cycling dynamics, may be especially useful indicators to assess the ecological status of restored stream reaches because these metrics integrate both in-stream and watershed characteristics. In our research, we evaluated several metrics of ecosystem structure and function of restored stream reaches relative to concrete-lined channels located immediately up or downstream of the restoration in six watersheds in Milwaukee, WI. Furthermore, we studied streams that spanned a range in size, from small headwater streams to mainstem rivers (baseflow discharge = 15–210 L/s), in order to evaluate whether stream size was related to changes in ecosystem structure or function from channel re-naturalization. Nutrient concentrations were generally high among our study streams (e.g., average nitrate = 552 µg/L, average ammonium = 51 µg/L) and did not differ between the restored and concrete reaches. In contrast, chlorophyll-a and organic matter content were generally higher in the concrete reaches. The homogeneity of the concrete channels allowed massive algal beds to grow, which led to high sediment deposition. Whole-stream metabolism, an estimate of the gross primary production (GPP) and ecosystem respiration (ER) within the stream reach, demonstrated that the streams were primarily autotrophic (i.e., GPP > ER). The preliminary metabolism results suggest that both the restored reaches and concrete channels are degraded given that streams in natural watersheds are predominantly heterotrophic (i.e., GPP < ER). Our research demonstrates that channel restorations do improve some ecosystem characteristics relative to up or downstream concrete channels, but suggests that ecosystem structure and function cannot be fully restored in urban streams by re-naturalizing short reaches alone.

Bio: I am an ecosystem ecologist, interested in the flow of energy and the cycling of nutrients through aquatic ecosystems. In my holistic approach to studying aquatic ecosystems, I use integrative tools of ecosystem function to understand how freshwater environments respond to natural and human-mediated changes, such as the impact of management actions or seasonal shifts in the biotic community.

The primary goal of my CILER post-doctoral research is to provide a quantitative assessment of the ecological value of urban stream restorations. The results from the field will be coupled with data on the economic and social costs and benefits of the restorations to prioritize locations within urban watersheds for future projects. I am conducting my research in the Milwaukee metropolitan area, collaborating with managers at local and state agencies, community groups, and scientists from institutions throughout the Great Lakes.  More information on my current research and previous work is available at peterlevi.weebly.com.