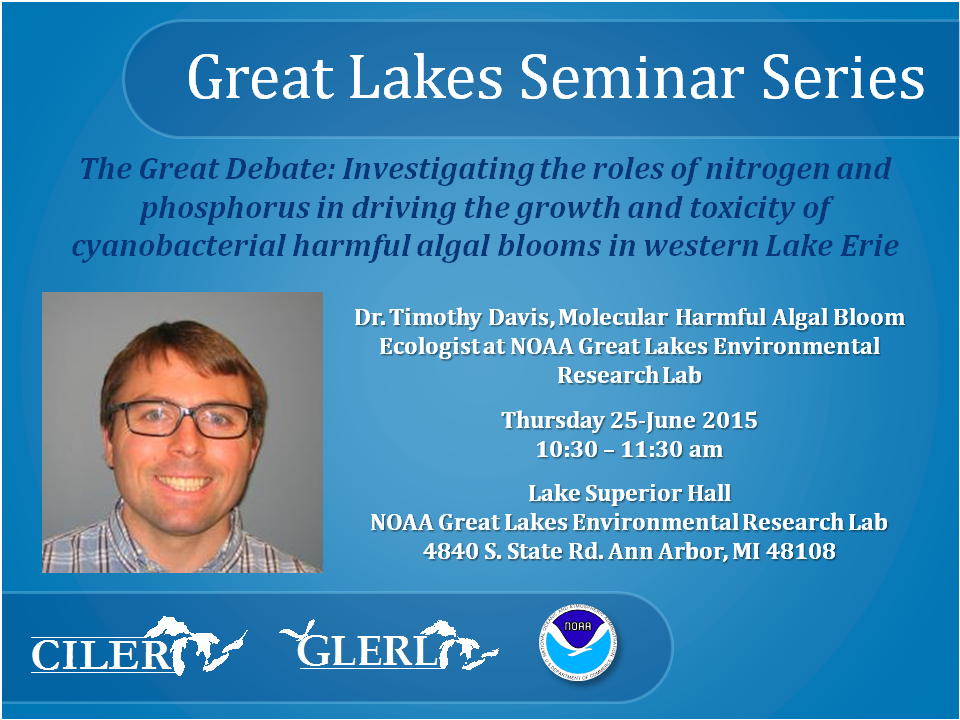 Please join us for the next CILER-GLERL Great Lakes series seminar:

Title: The Great Debate: Investigating the roles of nitrogen and phosphorus in driving the growth and toxicity of cyanobacterial harmful algal blooms in western Lake Erie

You do not need to register to attend in-person. There will not be a webinar for this presentation.

Abstract: Lake Erie is once again experiencing intense cyanobacterial harmful algal blooms (CHABs) in the western basin and more pronounced hypoxic events in the bottom waters of the central basin.  While it is well known that cultural eutrophication is a primary driver of these phenomena, there is fierce debate over the roles of nitrogen (N) and phosphorus (P) in stimulating the growth and toxicity of CHABs. While it has been shown that estimates of bloom size can be made using spring P-loading values from the Maumee River to Lake Erie, to date no such model exists for estimating bloom toxicity.  Furthermore, the role of N in stimulating CHAB growth and toxicity in Lake Erie has only recently been gaining attention.  Several investigators have addressed this issue but to date no clear consensus exists.  This lack of understanding is partially due to the fact that the limnological conditions in western basin Lake Erie are highly variable and blooms may be experiencing both P limitation and N limitation simultaneously, therefore sampling bias may skew conclusions.  Furthermore, different organisms are responsible for the CHABs in the open lake versus Lake Erie tributaries.  For example, Microcystisspp. comprises much of the bloom biomass in the lake proper where as Planktothrix spp. comprises a majority of the biomass in Sandusky Bay and the Maumee River.  Both genera have strains that are able to produce toxic microcystins, however, N and P can stimulate bloom growth  differently throughout the season.  I will present the results from long-term monitoring, microcosm experiments and advanced genetic techniques.  Initial findings indicate that bloom biomass is P-limited in the lake proper during the early bloom stages and cellular nutrient limitation shifts from P to N in late summer.  Furthermore, CHABs that form in tributaries such as Sandusky Bay were primarily N limited throughout the bloom season.  Finally, metagenomic and eco-transcriptomic results have shed light on why a non-N-fixing cyanobacterium (Planktothrix) can dominate in a chronically N limited system and reveal mechanisms that Microcystis can use to outcompete other phytoplankton during times of P limitation.  All of these data indicate that while P is critical for initiating western Lake Erie CHABs, N may be more important for stimulating growth and toxin production in total, hence both N and P must be considered when developing nutrient mitigation strategies.