About: The microbiome represents the collective genomes of microbes in a particular environment and is generally characterized by high-throughput next generation sequencing of 16S rRNA genes. The virome is the viral analogue to the microbiome, representing collective genetic material of viruses within a particular environment. The gut microbiome has received significant attention in humans because of the role these microbes play in human heath, physiology, and behavior (Lozupone et al. 2012). Recent investigations of the gut microbiome in non-human animals confirm the important role that microbes play in organismal fitness and behavior (Colombo et al. 2015; Johnson and Foster 2018). These roles are particularly important in fisheries, where altered gut microbiomes in hatchery fish may contribute to decreased individual body condition (e.g., individuals not suited for food assimilation in natural habitats), suboptimal behavior (e.g., lack of neophobic responses and more susceptible to predation), and altered migration patterns. The virome in freshwater fishes is almost totally unexplored, leaving a significant gap in our understanding of the importance of viruses to the regulation of natural populations and the potential detrimental impacts of viruses on fish health in hatcheries.

The gut microbiome of Atlantic salmon (Salmo salar) has been shown to vary throughout the lifecycle of individuals, suggesting the association of these microbes with various aspects of the life history of this species (Llewellyn et al. 2016). More generally, the gut microbiome has also been suggested to be an important consideration for successful re-establishment of extirpated species (West et al. 2019), which is also relevant to Atlantic salmon. However, nothing is known about how the microbiome varies among Atlantic salmon individuals in hatcheries, the impact of this variation on survival, and whether hatchery conditions influence microbiome composition throughout the life-cycle of fish.

The Center for Freshwater Research and Education (CFRE) at Lake Superior State University operates an Atlantic salmon hatchery in collaboration with the Michigan Department of Natural Resources (MDNR). As a result of this unique operation, we have the opportunity to collect important preliminary data on the gut microbiome and virome of adult Atlantic salmon (hatchery-reared but living in the wild for 2-4 years), and whether these differ from assemblages in age-0 fish reared in the hatchery. However, there is a rapid need to conduct this work within the next several weeks.

Adult individuals reared at CFRE and at MDNR hatcheries are in the process of returning to the St. Marys River and will be sampled by scientists at CFRE in early November. Rapid funding will allow us to characterize the microbiome and virome of these fish which were raised and released from different hatcheries several years ago, along with juveniles currently in the facility. While protocols are available to preserve the microbiome for later processing, the virome will require almost immediate processing to avoid sample degradation. Moreover, these results are necessary to support larger proposals that will examine effects of diet and rearing conditions on the microbiome, virome, and performance of hatchery-raised Atlantic salmon.asdas

About: The COVID-19 pandemic has caused substantial delays in the deployment of weather / wave buoys throughout the Great Lakes, placing human lives at risk just at a time when communities are beginning to return to recreation, fishing, and boating on the Great Lakes. As of the start of Memorial Day weekend, none of the regularly deployed buoys from the National Data Buoy Center (NDBC) are on the lakes, and NDBC does not expect full deployment until mid July. Continued delays into the fall are possible, putting commercial shipping at risk during the height of the storm season. In addition, numerous nearshore buoys such as those along Pictured Rocks National Lakeshore also remain out of service due to COVID-related delays, despite reliance on these buoys by the National Weather Service (NWS), National Park Service, U.S. Coast Guard, recreational kayakers, and commercial fisherman, among many other groups. This constitutes an emergency situation that puts Great Lakes communities and businesses at significant risk from the massive gap in data and the adverse impact it will have on NWS nearshore marine forecasts.

The GLRC at MTU proposes to address this gap for Lake Superior by purchasing a Sofar Ocean “Spotter” wave buoy to measure wave conditions, wind velocity, and surface water temperature. The buoy would be deployed at a strategic location such as Pictured Rocks National Lakeshore or Stannard Rock (a popular fishing reef, and close to commercial shipping traffic). MTU is uniquely positioned to tackle this problem, as the GLRC has experience operating and testing the new Spotter technology, including transmission of data to public outlets (e.g., UGLOS, NDBC, and GLOS), and the GLRC also has a fleet of small boats that is capable of rapid deployment on Lake Superior. Sofar Ocean is prepared to ship a new Spotter immediately. 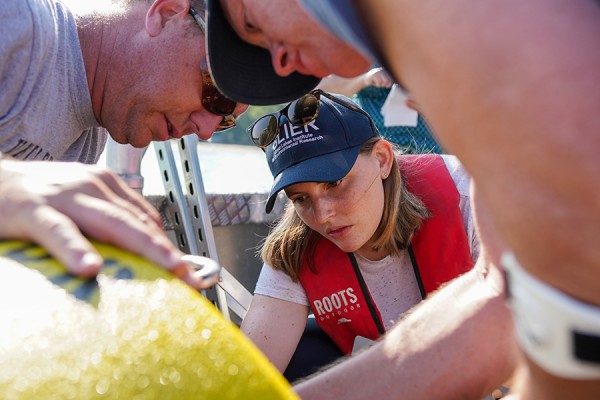 About: Great Lakes water levels have reached record highs in 2019, eroding shorelines, threatening and damaging public/private infrastructure (e.g., marinas, homes and cottages), and overwhelming water systems in communities. On July 7, 2019, strong winds from the northwest pushed Detroit River water above the storm water system in Lasalle, Ontario, resulting in significant flooding, closure of streets, and limiting access to homes, public spaces (closed swimming pools and sport fields) and many businesses. The flooding also raises issues for the health of the Detroit River ecosystems, and downstream systems including Lake Erie. Currently, there is an urgent need to monitor water levels in the region and catch this event while it is still ongoing. Rapid funding provided by CIGLR will support water level, wind speed and direction and wave height instruments to be installed on the Detroit River and will be leveraged with instruments and technological support from the Realtime Ecosystem Observation Network (RAEON), which is based at the University of Windsor and provides instruments for Great Lakes research. 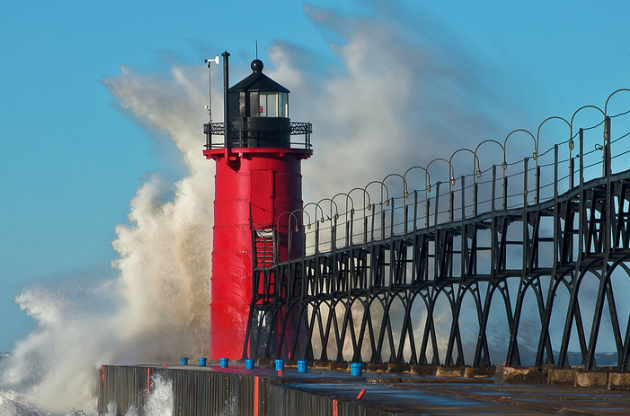 About: The recent occurrences of a meteotsunami event on Lake Michigan, including a 14 inch water level rise in only 40 minutes near Ludington MI on April 13, 2018 (MLive), demonstrated that the existing observing network is not adequate to observe or attempt to predict this phenomenon. Meteotsunamis have the potential to cause significant damage to shoreline structures and can endanger lives (Bechle et al. 2016, Nature). A more robust monitoring and alert system is needed on Lake Michigan and Lake Erie to monitor, detect and mitigate the impact of future events. The rapid funding provided by CIGLR will be used to immediately supplement ongoing projects at NOAA GLERL and LimnoTech to develop a monitoring and notification system for atmospherically significant events that could lead to meteotsunami events. The rapid response funds will be used to (1) develop a data management system to log, archive, and display relevant meteorological (wind speed, direction and air pressure) and water level data from existing and new stations and (2) upgrade the existing observing system reporting frequency and add up to four new stations. Both tasks will focus on Lake Michigan and Lake Erie as those two lakes have higher occurrence and resulting impacts to life and property.