As a direct consequence of eutrophication, there has been an alarming increase in the spatial and temporal extent of low oxygen (hypoxia) in estuarine and coastal waters. Coastal hypoxia (referred to as “dead zones”) has become increasingly frequent throughout the world. This increase in hypoxia has been linked to increased cultural eutrophication. Eutrophication-induced hypoxia is prevalent in numerous coastal ecosystems along both the Atlantic and Pacific coasts of the U.S., with Chesapeake Bay, the Northern Gulf of Mexico (NGOMEX), and the Laurentian Great Lakes (i.e., Lake Erie) having the most prominent and largest hypoxic areas. Despite a reasonable understanding as to the causes of coastal hypoxia, the impacts of low oxygen availability on food web dynamics and fisheries production, especially in the pelagic zone, remain poorly understood. This lack of understanding severely limits management efforts aimed at forecasting production of living resources in hypoxic systems.

To assess the full impact of hypoxia on living resources requires a multi-scale (both time and space), multi-stressor (e.g., the combined effect of climate and eutrophication), and cross ecosystem approach. The objective of this project is to develop a modeling framework to simultaneously account for direct and indirect effects of hypoxia, including their linear and non-linear interactions on key organisms to support ecosystem-based management. This is part of a much larger program comparing the impact of hypoxia on living resources across ecosystems (NGOMEX, Lake Erie, and Chesapeake Bay). Here, we develop a battery of modeling approaches of varying complexity (individual – to ecosystem-level), spatial configuration (near-field plume to fine-scale spatial pelagic), and temporal duration (hourly to inter-annual) to provide both understanding and forecast capabilities to the management community of the NGOMEX.

Multiple mathematical models are being used to characterize the effects of the spatial and temporal distribution of hypoxia on: 1) diet habits of economically and ecologically critical fishes; 2) food web structure and interactions; and 3) fish distribution.

We hypothesize that hypoxia in the NGOMEX can strongly impact pelagic food webs and production through unexpected, indirect pathways, potentially leading to changes in production potential (both positive and negative) of economically and ecologically important fishes. Our overall goal is to provide quantitative tools to probabilistically forecast the effects of hypoxia on the living resources in the NGOMEX. We have direct linkages to fisheries management, which ensures continued interaction with, and attention to, the critical management issues. 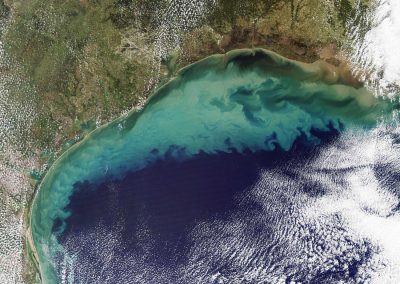