Inland waters play an important role in global carbon cycling. Carbon entering an inland water system is either lost to the atmosphere, stored in sediments, or transferred downstream to oceans. Worldwide, lake ecosystems account for a minor percentage of Earth’s surface area when compared to terrestrial and oceanic biomes, yet they process a significant amount of the global carbon pool – a factor that is missed by most global carbon models. As climate change becomes a more central issue, understanding the global carbon budget and how it influences global warming is crucial. Therefore, by improving our ability to account for carbon processing in lakes, we will add significant information to global carbon balance estimations.

Katie Knapp is an M.S. student at Grand Valley State University and 2017-2018 CIGLR Graduate Research Fellow recipient, advised by Dr. Bopi Biddanda and co-mentored by Steve Ruberg (NOAA GLERL). The goal of her fellowship research is to provide a better understanding of carbon cycling in Great Lakes coastal ecosystems, such as lakes and estuaries, and ultimately apply her methods and results globally.

Katie’s research takes place in Muskegon Lake, which is characterized as a freshwater estuary drowned river mouth and classified as an Area of Concern by the EPA. She uses the Muskegon Lake Observatory system (established in 2011) to retrieve water quality measurements and meteorological data (Figure 1). In addition, three buoys were added to this system in 2016 that have increased the spatial data collection of physical dynamics in Muskegon Lake. Katie estimates rates of carbon processing, or metabolism, by using the changes in dissolved oxygen measured by this network of 4 buoys. 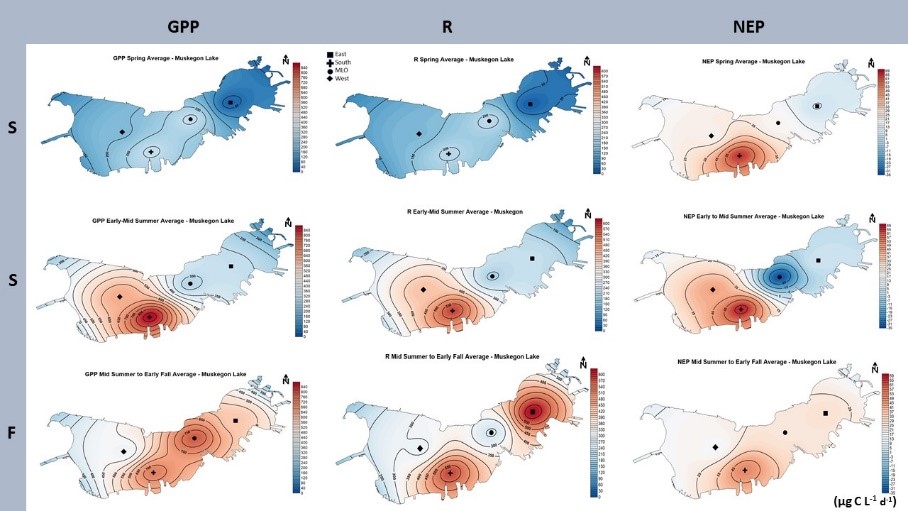 Currently, this study indicates that metabolism peaks in the summer and early fall with reductions during the late fall and into winter – during which the system quietly resets. In the spring, lake metabolism gradually rises once nutrients (mineralized during the winter months) become available and temperatures begin to warm. Our data show that metabolic rates vary spatially across Muskegon Lake where mid-lake areas (impacted less by increased turbidity and water velocity associated with nearshore river inlets) have higher metabolism and areas near the river inlets have lower production rates and higher respiration rates (Figure 2). In addition, data show that storm events pause lake metabolism for a short period during and after the event. These multi-year studies indicate that the Muskegon Lake Estuary ecosystem serves as an annual sink for atmospheric CO2. Ultimately, Katie will compare the results from this study to existing global lake data and develop a schematic model of changes in carbon metabolism.

Katie Knapp was a CIGLR Graduate Research Fellowship recipient in 2017-2018, and is currently a Masters student at Annis Water Resources Institute at Grand Valley State University. This fellowship provided Katie with opportunities to collaborate with NOAA scientists, specifically her co-mentor Steve Ruberg. In addition, Katie has shared her research results at various scientific forums including the annual 3-Minute-Thesis competition at GVSU, the Michigan Space Grant Consortium and the Marine Technology Society meeting.