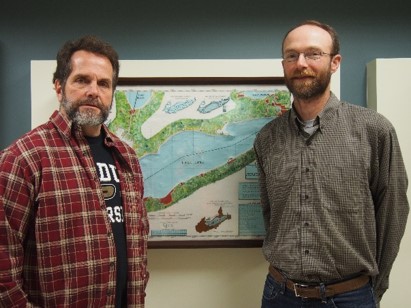 Over 11 million people in the U.S. and Canada rely upon Lake Erie as a source of drinking water. Most are familiar with Lake Erie’s past and ongoing water quality challenges, including harmful algal blooms and pollution, but many are less aware of the growing concern over hypoxia. The central basin of Lake Erie has experienced a lack of oxygen near the bottom of the lake nearly every summer since the late 1990’s. Hypoxia may sometimes manifest as dramatic ‘fish kill’ events, but a more common impact is its effect on water quality at public utility intakes.

A team of scientists led by Mark Rowe (CIGLR) and Craig Stow (NOAA GLERL) is working to improve predictions for when and where hypoxia will occur, how it moves around the lake, and ultimately, when it may impact water utilities. When oxygen levels in the lake drop during summer, the hypoxic water can become more acidic and corrosive, smelly and discolored, and potentially high in trace contaminants such as iron and manganese. Under certain wind directions, this hypoxic water can be pushed toward shore where it can enter intake pipes used by public water utilities. Furthermore, hypoxic events with elevated manganese can be particularly difficult for public water utilities to treat, as many feel they lack the necessary resources to respond to the problem.

The showcase product from this research is the Experimental Lake Erie Hypoxia Forecast. This tool provides short-term forecasts of the distribution of hypoxic water in the lake, which gives water intake managers precious lead time in anticipation of hypoxic events. The research team engages directly with stakeholders at public water utilities to ensure the tool meets their needs.

One outcome of this engagement has been the capacity to issue alerts to drinking water treatment managers when they are likely to experience hypoxic water at their facility so that they can prepare to adjust their treatment process. This partnership has also identified new emerging areas of research. For example, manganese is an element that occurs naturally in lake sediments, but can be released into the water under hypoxic conditions. Manganese exposure is a recognized human health concern and requires changes to the water treatment process. In response to feedback from water utilities, the team is working to identify the conditions that lead to manganese accumulation in Lake Erie so that it can be incorporated into future forecast systems.

Researchers from CIGLR and NOAA GLERL deploy real-time instrumentation for monitoring dissolved oxygen in Lake Erie (left), incubate sediment and water samples from the lake to precisely measure changes in oxygen over time (center), and maintain a real-time forecasting interface on the web (right).

As they enter the third year of the 5-year project, the team is working to improve the predictions from the Experimental Lake Erie Hypoxia Forecast through a combination of real-time monitoring of dissolved oxygen using instruments deployed across the lake, sampling surveys aboard research vessels, laboratory experiments, and refinements to the model.