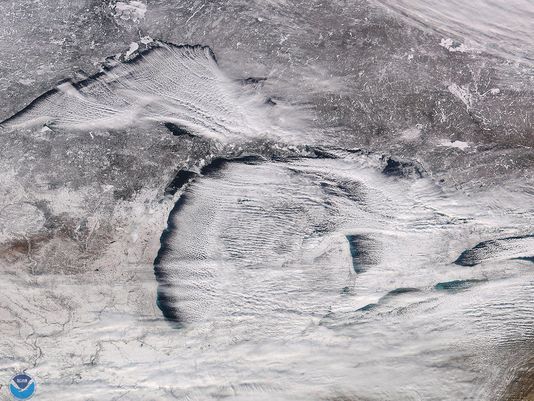 Due to their massive size, the Great Lakes have a large influence over the regional climate. The lakes store and move substantial amounts of heat and water, making the weather here very unique. During late fall and winter months the lakes lose their summertime heat to the atmosphere, taking with it large volumes of water. This evaporated water freezes and finds its way back to earth in the form of lake effect snow. While the snow belt regions downwind of the lakes have grown accustomed to this phenomenon, lake effect snow events are notoriously hard to predict. Forecasters in these areas often do not have certainty in the location, duration, or severity of lake effect snow. The potential impacts to human safety and local economies warrant more accurate and dependable lake effect snow forecasts.

“In collaboration with NOAA’s Great Lakes Environmental Research Lab, Earth Systems Research Lab, and the National Weather Service, our team at CIGLR is working to improve lake effect snow forecasts,” says Dr. Ayumi Fujisaki-Manome, CIGLR Assistant Research Scientist. “Our most recent study published in the Journal of Hydrometeorology focuses on the massive lake effect snow storm that crippled southwest New York in November 2014. Our study conducted the first-ever evaluation of how the heat transfer between Lake Erie and the air fueled the storm by comparing atmospheric moisture and evaporation loss from the lakes between numerical models and observations.” 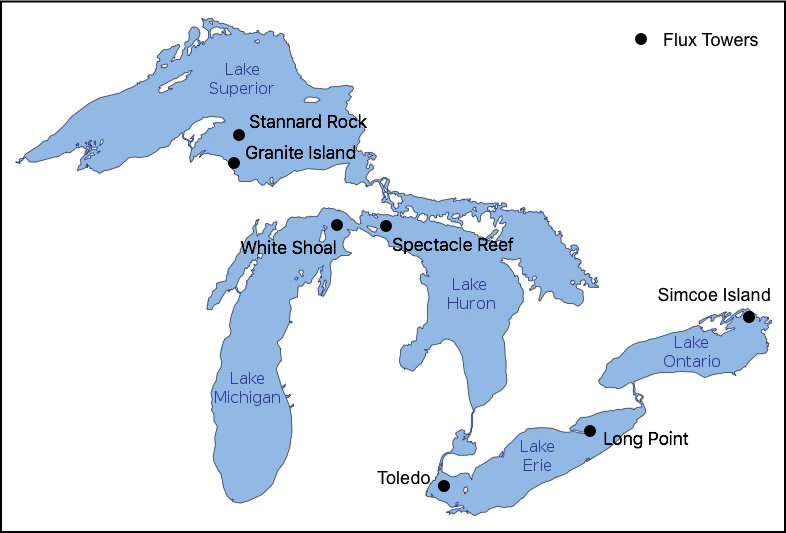 There are seven flux towers, also known as evaporation stations, that are operational throughout all five of the Great Lakes. Figure By: Lindsay Fitzpatrick.

Historically, accurate predictions of lake effect snow have proven challenging for forecasters. This was illustrated by the November 2014 lake effect snowstorm that hit Buffalo, NY, dumping nearly 7 feet of snow in areas just east of the city and only inches a few miles to the north.

Lindsay Fitzpatrick, CIGLR Atmospheric Data Analyst, states that, “Currently, operational models provide guidance for lake effect snow forecasts; however, often times they miss the timing, the location, or even the intensity of the snow fall. In the case of the November 2014 event, all of the weather models seemed to miss one of these things.”

Luckily, there is a growing network of observational stations known as “flux towers” that is collecting critical information to help improve lake effect snow forecasts.  Mounted on lighthouses throughout the Great Lakes, the flux towers take year-round meteorological measurements such as air temperature, solar radiation, wind speed and direction, and evaporation. They are part of the Great Lakes Evaporation Network (GLEN), led by scientists at the University of Wisconsin, the University of Colorado, and Environmental and Climate Change Canada in collaboration with the NOAA Great Lakes Environmental Research Laboratory (GLERL), Great Lakes Observing System (GLOS), and other university partners. In all, there are seven flux towers in the Great Lakes, located at Stannard Rock and Granite Rock on Lake Superior, at White Shoal on Lake Michigan, at Spectacle Reef on Lake Huron, at Toledo and Long Point on Lake Erie, and at Simcoe Island on Lake Ontario.

Dr. Ayumi Fujisaki-Manome says, “Using the flux tower observations, we are able to evaluate how models simulate heat and moisture exchanges, or fluxes, between the lake and the atmosphere. In this case study, we found that models captured the exchange to some extent but the variation among models was still quite large.”

As numerical models have continued to improve toward higher spatial resolution with advancement in computer technology, scientists are relying more on these types of models and observations for detailed predictions about lake effect snow events.

“This type of study had never been done on the Great Lakes before,” says Fujisaki-Manome.  “By using the observations at the flux towers, we can further fine-tune weather forecast models and improve lake effect snow forecasts. This is actually happening. In a new study funded by NOAA’s Office of Weather and Air Quality, our team is working to incorporate better representation of lake physics in weather forecast models. This effort will contribute to improved forecasts, more effective warnings, and better human safety.”