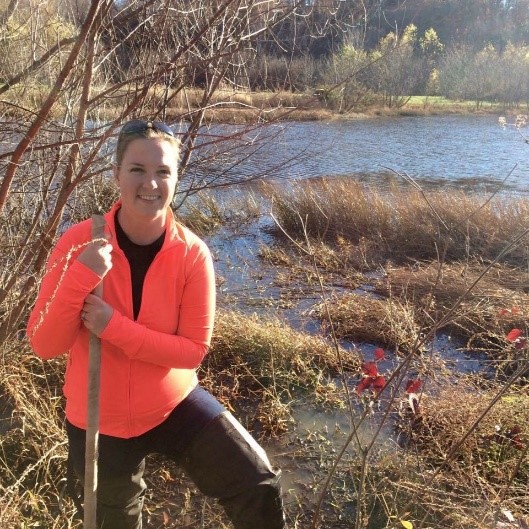 The poor water quality of Lake Erie became readily apparent in the 1960s, sparking several iterations of the Great Lakes Water Quality Agreement (GLWQA) between the United States and Canada and reductions in phosphorus inputs to Lake Erie. As a result, water quality markedly improved and by the 1990s many thought the lake was “cured.” However, in recent years Lake Erie has been plagued by massive algal blooms and a growing hypoxic zone, an indication that the lake’s problems are not over.

“Both the incredible improvement and then surprising decreases in water quality show us how dynamic the Lake Erie system can be,” says Dr. Freya Rowland. “We know that excessive growth of algae is strongly tied to phosphorus from streams entering Lake Erie, and that large amounts of decaying algae contribute to hypoxia in the central basin, which is similar to the dead zone in the Gulf of Mexico. What we need to do now is figure out how all of the various stressors to Lake Erie interact to form algal blooms. Algal toxins and hypoxia threaten the drinking water of millions of people who live in cities surrounding Lake Erie such as Toledo and Cleveland, but we’re still trying to figure out the details of what determines bloom extent and toxicity.”

Freya Rowland is a CIGLR postdoctoral research fellow working with Drs. Thomas Johengen (CIGLR) and Craig Stow (NOAA GLERL) to build statistical models of long-term trends in Lake Erie harmful algal blooms (HABs), in an effort to better understand and predict their toxicity and growth. “Algal bloom extent and toxin production are not always closely associated. A very large algal bloom can have low toxicity and vice versa,” says Rowland. “It is our goal to explore what might cause these phenomena.” 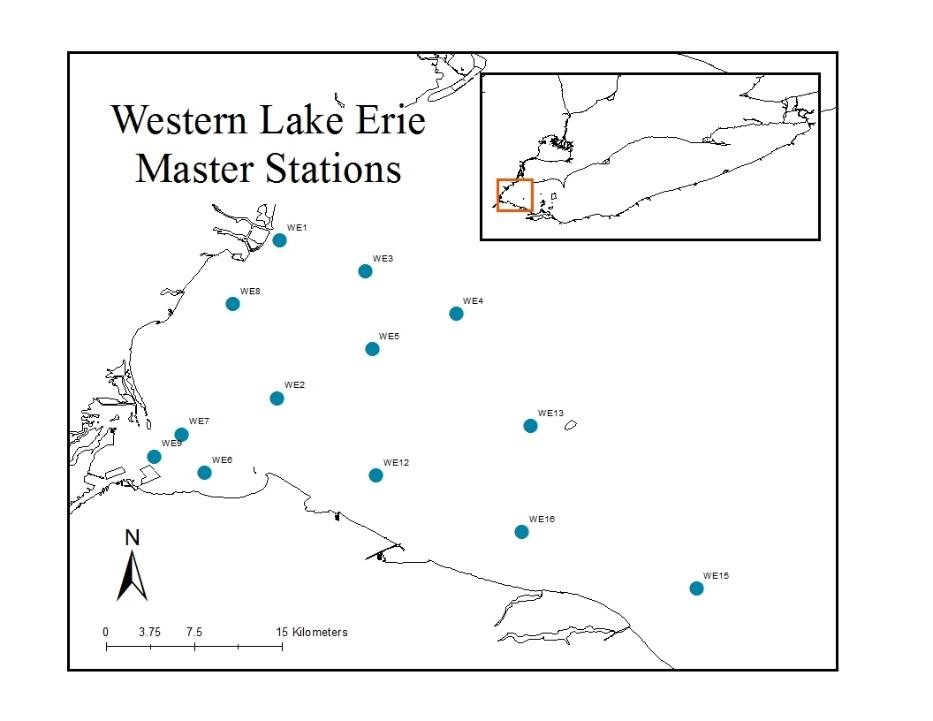 “Long-term datasets are generally the products and hard work of many people over the course of many years,” says Rowland. “In water science they play an important role in sensible water management strategies and policies which, in turn, will help sustain clean and healthy water supplies for future generations.”

Dr. Rowland’s research is designed to tie closely with the GLWQA and its policies, “so my research and results can move straight to recommendations for how to improve water quality,” says Rowland.

The western basin of Lake Erie receives nutrient-laden water from a watershed dominated by agriculture (60-80%) and several large cities (e.g., Detroit, Toledo, Monroe). Excess nutrients, along with the warm and shallow waters of Lake Erie, make this area extremely susceptible to the formation of harmful algal blooms. Since 2008, NOAA GLERL has completed weekly samplings of approximately 12 stations in western Lake Erie from April to October (Figure 1). Data collected from these stations include measurements of light availability, nutrient concentrations, algal biomass, and algal toxins in the lake. Currently, these data are being incorporated into probabilistic statistical models to describe how Lake Erie is changing over time and how to predict algal bloom toxicity.

The Maumee River is thought to be responsible for most of the phosphorus inputs to Lake Erie. Phosphorus is a nutrient important for plant growth and originates from a variety of sources, many of which are related to human activities including animal wastes, soil erosion, detergents, septic systems, and runoff from farmland. Much of the phosphorus entering Lake Erie is already in its dissolved reactive form (soluble reactive phosphorus [SRP]) and can be directly taken up and used by plants, in this case, algae.

Fitting probabilistic statistical models to these data is essential. Not only do the models explain general trends, but they also provide the probability that the observed trends are true. Rowland says, “Now that we’ve looked at the broader picture of the long-term trends, the next step is to explore what helps predict toxicity in algal blooms. There are so many questions these data can answer and we’re looking forward to the results!”

Dr. Freya Rowland is a CIGLR postdoctoral research fellow working with Drs. Thomas Johengen (CIGLR) and Craig Stow (NOAA GLERL) to assemble and use historical data collections from Lake Erie. By building statistical models, they hope to better understand general water quality and harmful algal bloom (HABs) trends, which will better predict their overall toxicity and growth. Previously, Freya used a combination of field studies, mesocosms, and statistical models to understand some basic questions about pond food webs and ecosystem functioning. She received her B.S. from the University of Wisconsin and her M.S. from Miami University in Aquatic Ecology. In 2018, Freya completed her Ph.D. in Ecology from the University of Missouri.