Lake-effect snow is a unique phenomenon to the Great Lakes region, and is only experienced in a few other places around the world. During late fall and winter months the lakes lose their summertime heat to the atmosphere, taking with it large volumes of water. This evaporated water freezes and finds its way back to earth in the form of lake-effect snow. Under certain conditions, narrow but very intense bands of snowfall may occur, taking travelers from clear skies to near whiteout conditions within a matter of minutes. Accurately predicting the placement and intensity of lake-effect snowfall downwind of the Great Lakes is vital, as the severe nature of this snowfall can result in hazardous driving conditions, property damage, and loss of life. 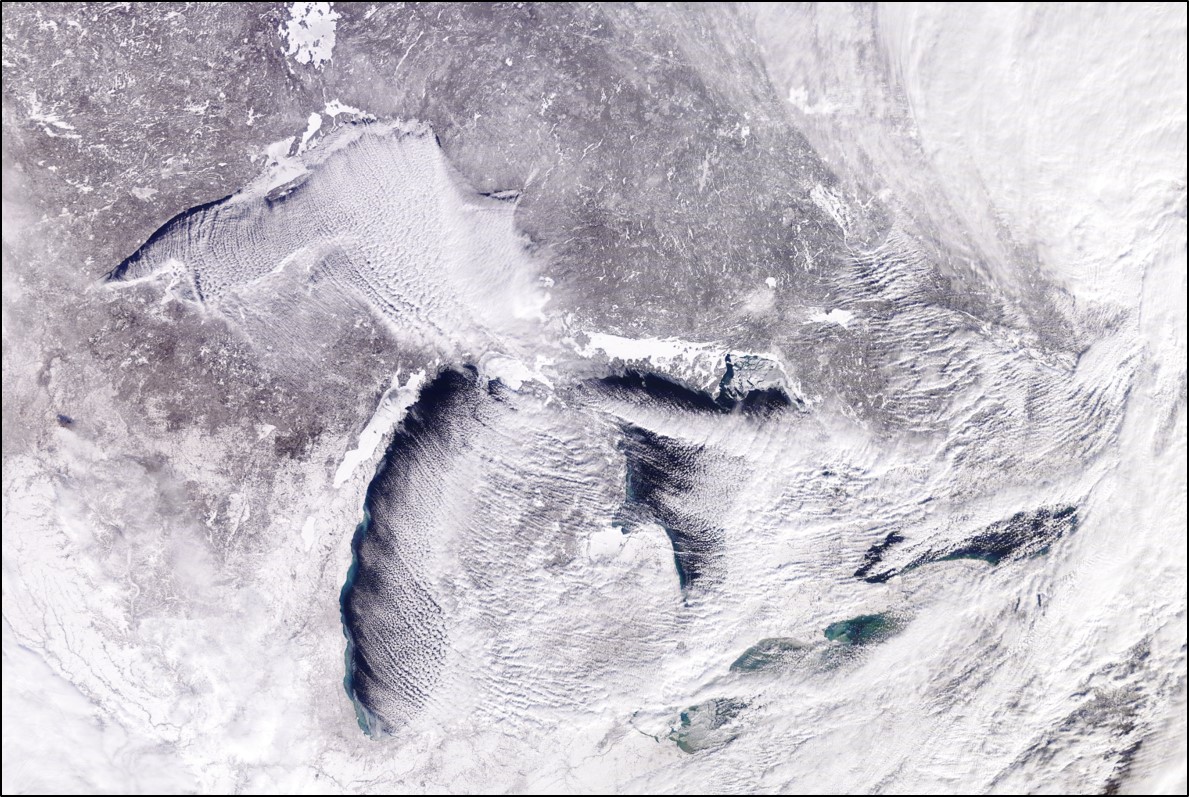 Dr. David Wright is a CIGLR Postdoctoral Research Fellow at the University of Michigan. David is working with CIGLR Assistant Research Scientist Dr. Ayumi Fujisaki-Manome along with NOAA GLERL Research Scientists Drs. Philip Chu, Eric Anderson, and Brent Lofgren to understand the sensitivity of atmospheric features to changes in surface conditions in the Great Lakes region and how this information can be used to improve forecasts and simulations.

“Weather prediction models routinely struggle to predict lake-effect snowfall events for a few reasons,” says Wright. “Snowfall bands can be so narrow that the models struggle to fully depict the exact placement and intensity of the bands.”

While increasing the grid resolution (the distance between points on a map where variables such as temperature, pressure, winds, etc. are numerically calculated) does typically improve a model’s ability to depict lake-effect snow, this can be very computationally expensive for a simulation which must be completed over a very short period of time to deliver forecasts and guidance to weather forecasters.

“Lake-effect snowfall conditions are predominantly driven by the lakes, specifically the lake surface temperature and ice coverage. While these conditions are represented in most operational weather models, they are often poorly initialized and can introduce errors into the weather forecast when lake surface conditions change rapidly,” says Wright. “An example is when lake ice develops rapidly over a few days during particularly cold conditions.”

“Currently, the National Oceanic and Atmospheric Administration (NOAA) is working to update the HRRR to a Finite-Volume Cubed-Sphere Stand-Alone Regional model known as FV3-SAR,” says Wright. “NOAA will then transition to the Unified Forecasting System (UFS), which brings together academic, government, and private sector researchers to develop a fully coupled model for the Earth system and unify operational model predictions, such as lake-effect snow forecasts, within NOAA.”

By incorporating GLOFS lake condition data, atmospheric models such as FV3-SAR continue to improve and bring model simulations of snowfall location and intensity closer to reality. These improved simulations can help local weather forecasters better predict and communicate the potential impacts from lake-effect snowfall events to help keep people safe during the winter months around the Great Lakes region. “The next step is to create a modeling framework that incorporates changing lake conditions over time, reflecting actual lake behavior,” says Wright. “My goal is to have a fully coupled lake and atmosphere model, one that will provide further insight into how these two systems interact with each other.”

About the Author
David received his Ph.D. (2016) in Atmospheric, Oceanic, and Space Sciences from the University of Michigan, studying the influence of lake surface conditions on weather phenomena in the Great Lakes region. He also holds a B.S.E (2009) in meteorology and a M.S. (2010) in atmospheric science from the University of Michigan. Dr. Wright is currently a CIGLR Postdoctoral Research Fellow working with CIGLR Assistant Research Scientist Dr. Ayumi Fujisaki-Manome and NOAA GLERL scientists Drs. Philip Chu, Eric Anderson, and Brent Lofgren.