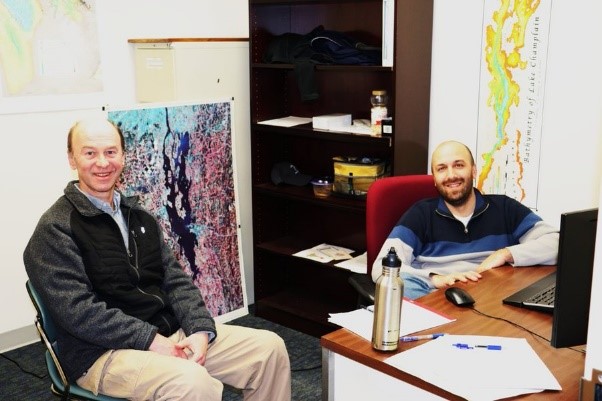 Lake Champlain is bordered by the states of Vermont and New York and the Canadian province of Quebec. The lake connects naturally to the St. Lawrence River via Quebec’s Richelieu River and to the Great Lakes via the New York State Canal System. The Lake Champlain basin extends along steep mountains and narrow valleys and has a relatively wet climate. In recent years, Lake Champlain has experienced several severe floods when rapid snowmelt from the mountains combined with spring rain produced a sudden rise in the water level of the lake. These conditions have caused significant destruction of property and infrastructure in the Lake Champlain basin.

Dan Titze, PhD, is a modeler at CIGLR working side-by-side with NOAA GLERL on a project to develop a flood forecasting system for Lake Champlain. The modeling system is being developed as part of a 5-year, $14 million study, funded by the International Joint Commission to better plan and prepare for flood events in the binational Lake Champlain basin. 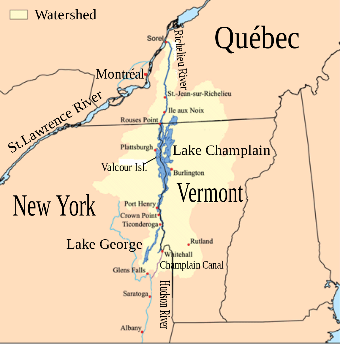 Lake Champlain, the Richelieu River, and the surrounding watershed (highlighted in light yellow).

As a hydrodynamic modeler, Dan starts by developing a 3D representation of the Lake Champlain basin. “Realtime weather forecast information is then fed into the model, which uses physics to predict how water will move through the lake over the next several days in response to outside forces such as wind, rain, and river inflows,” said Titze. ‘Because these models are computationally intensive, they are run on supercomputers in order to generate timely predictions of lake levels and waves for forecasters.”

“This model is being developed in close collaboration with the National Weather Service and emergency managers, who will use results from the Lake Champlain forecasting system to provide advance warning of floods to residents and other area stakeholders,” said Titze. “The Lake Champlain project is a highly collaborative, multi-disciplinary project, and is an example of CIGLR bringing its expertise in modeling to a lake outside of the Great Lakes basin, where that sort of data has historically been a bit more limited.”